Made with both Jim Beam Bourbon and Russell 6 Rye. Both really excellent. Be careful with Lemon if using Fino -- was a bit dry with Rye.

Bourbon After the Act 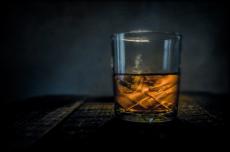 The second in this series, our story resumes with the Bottled in Bond Act of 1897. Read them all: Bourbon, Bourbon After the Act, Bourbon: What it is ... and isn't, Making Bourbon, Who Makes My Bourbon, Producer Capsules., Finding the Good Stuff, Tasting the Good Stuff, Neat, Mashbills, Geeky Information and Resources.

The Act created a new type of whiskey, called Bonded, or Bottled-in-Bond (BIB). Bonded whiskey must be the product of one year’s distilling, from a single distillery, aged in a Federally supervised warehouse for no less than four years, and bottled at 100 proof. All Bonded whiskey has a DSP (Distilled Spirits Plant) code on it, the complete list of which can be found online.

The Bottled in Bond Act was brilliant on two levels. On the producer side, people like Colonel E.H. Taylor (of Old Taylor fame, though there’s now an EH Taylor bottling) fought for government supervision of their aging stocks because the public would know exactly what they were buying. On the government’s side, Treasury Secretary John Carlisle wanted to ensure proper payment of Federal tax, which had been a major source of both revenue and headache since 1791’s Whiskey Rebellion.