Piquín chile also suggested, and Greenbaum notes that agave or honey sweeteners work well as subs, and fresh chiles or strawberries can be thrown in. 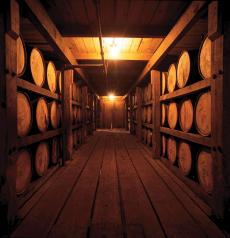 This is the sixth in a series on Bourbon by Zach Pearson. Read them all: Bourbon, Bourbon After the Act, Bourbon: What it is ... and isn't, Making Bourbon, Who Makes My Bourbon, Producer Capsules., Finding the Good Stuff, Tasting the Good Stuff, Neat, Mashbills, Geeky Information and Resources.

Distilling at what is now Buffalo Trace in Frankfort probably began in the 1850’s, but Edmund Haynes Taylor (yes, there’s an E.H. Taylor line) bought whatever was there and renamed it the “Old Fire Copper” distillery (OFC) in 1870. After an 1872 expansion, George T. Stagg (yep, there’s a BT label named after him as well) bought the place in 1878 only to have it struck by lightning and burn to the ground merely four years later. The 16 year old Albert Blanton (you guessed it – more whiskey named for him) started there in 1897 and was promoted to Superintendent in 1900. As Prohibition was winding down, the Schenley company bought the distillery, now named after Mr. Stagg in the wave of consolidation that saw distributors and marketers own distilleries.

In 1983, the plant was sold to some investors who were focused on the Japanese market under the name Age International. Though other companies will argue this point, what is now these investors did come up with Blanton’s. the first “single barrel” Bourbon in 1984.