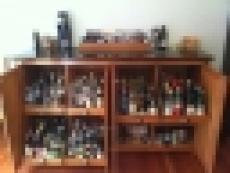 Membership
User since 12 years 2 months ago.
Contributions
120 cocktails posted.
135 cocktails in cocktail book.
I am a
Kindred Cocktails Curator
Real-life Name
Zachary Pearson
Home town
I can see Portland, Oregon from my balcony
About me

My adventure with alcohol began the summer before my wedding, when my wife-to-be asked if we were serving wine at the reception. At the time, I was a Shiner Bock drinker, and knew nothing about wine or spirits. The first time she asked, I gave her a rather non-committal "Yes" and didn't think much of it. A week later, she asked me again, and this time, had the look in her eyes that every man knows. I took a full ten seconds to think about it, and told her that yes, we would have wine at the wedding.

Little did I know that ten seconds of thinking and a hope that she would forget she'd asked me would turn into a ten year stint in the wine business. At first, I sat down for six months and read about wine, finally getting up the nerve to walk into a liquor store and actually buy a bottle, taste it, and think about what I smelled and tasted. It wasn't long before I was working at that liquor store, having finally annoyed enough people to make them hire me (which in retrospect, was probably their idea of shutting me up). My first day on the job, I ended up drinking Bertani Amarone going back to 1964.

Little did I realize that the retribution for getting to travel the world, meet winemakers and celebrities, and drink amazing wines would be cosmically balanced by 5 AM inventories in 55 degrees temperature controlled storage, 115 hour work weeks in the middle of the dreaded OND (October, November, December) holiday season, and the joys of having people tell me that wine made them sick.

So after doing this for years, I was a wine guy. I earned my CSW (Certified Specialist of Wine) in 2009, which involved intensive study of the world's wine regions, grapes, production methods, and other trivia -- We were routinely given maps of Italy with just the regions shaded in, and told to give the region's name and every DOCG in that region, of which there are now 73 (back in my day, there were 47). Amidst all this studying, I got to hang out with some great sommeliers and other assorted ITB (In The Business) people, most of whom talked about a crazy new bar that was about to open, full of people who loved classic cocktails.

Remember, this was Houston, a place where ordering a Manhattan most places got you a blank stare, and most of the times Bourbon and neon-red Maraschino cherry juice, with no bitters at all. These were days before Rittenhouse 100 was available in Texas, much less the Haus Alpenz portfolio. At that point I knew a little about spirits, but drank 95% wine. Liquor meant Islay Scotch with an ice cube during winter, as it was good for the sore throat I invariably had after working twelve hour shifts.

Once the place opened, I started talking to the guy behind the bar. A few days later, he knew where I worked, and gave me a four page list of liquor brands that he wanted but were unavailable in Texas. I had a few conversations with our liquor buyer, and we started seeing actual craft ingredients show up in the store.

Now, I live in Portland, Oregon. Certainly a great place for cocktails, but I've been fortunate to learn how to make drinks first, from sourcing interesting liqueurs to scavenging in out of the way places. I think I've put together a pretty good home bar (the picture of which is my avatar). I've been working with our Chief Swizzlestick for just over a year now, writing Wikipedia-like articles for each ingredient (things I've done show up in blue, and are hyperlinks) in the Kindred Cocktails database.

So here's what I like, so you have a feel for my palate: I love Islay Scotch, especially Lagavulin 16. I love Rye whisky, particularly Bulleit. I love Amari, of pretty much any shape or size or flavor. Made out of artichokes? Gentian liqueurs? Yep. In a more obscure vein, I love wacky eau de vie. Not just the normal stuff like raspberry, cherry, or pear, but rowanberry, ginger, service tree, elderberry... you name it, if it's well made, I love it. Particularly Rochelt, Hans Reisetbauer, and the stuff from Trimbach.