Stir with ice. Strain into rocks glass over large ice. No garnish.

No garnish. Originally, this drink called for Chicory & Vanilla Bitters from Drunken Crane bitters, but other vanilla bitters will work as well.

A cocktail of Rye Whiskey, Smoky Mezcal, Benedictine Liqueur and Chicory & Vanilla Bitters made for the perfect drink to capture Los Angeles in a glass. That was the goal of the LA distillery, Greenbar Collective. The contest took place back in the spring of 2014 and was their goal was to find a drink that would be to LA what the Manhattan was to New York.

I really wanted something where you could taste the sunny, sandy, smoggy, glitzy, palm-lined, paved chaparral, suburban-sprawl, melting pot of the Los Angeles Metro Area—known to newscasters as The Southland. More importantly, I wanted to use all-booze ingredients that were shelf-stable. I originally tried it with other bitters, but then a friend of mine, Michael Crane, gave me a sample of his newly minted Chicory & Vanilla bitters, which took it to the next level because they really helped punch up the Benedictine. 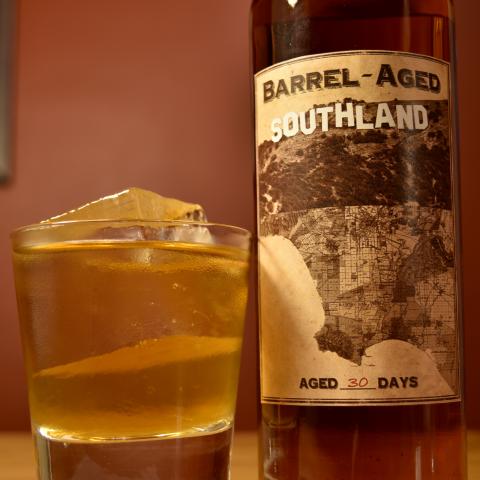