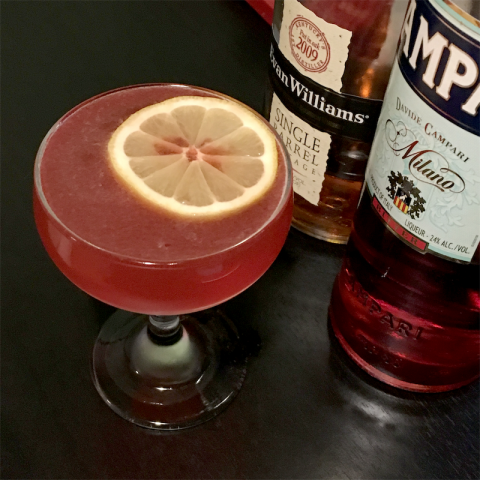 Is an
authentic recipe
Reference

Sounds like a nice drink, but it's hard to believe it needs the simple unless you have a real sweet tooth.

The "Italian Gentleman" is one of those interesting but hard to explain why drinks. After making the drink and taking a few sips, I knew it could taste better,but I wasn't sure how to make it better, except by experimenting. So off I went! Because of the presence of both Campari and lemon juice I knew I had to use a bourbon that could stand up to these two ingredients. ​Maker's Mark​, which is a  gentle bourbon (and one of my favorites), would be bowled over by the Campari and lemon juice. So I choose instead a bold bourbon—​Angles Envy (86.6 proof)​—for the task. Also, I used half of the lemon juice called for because of my personal taste. The result was a cocktail that was OK, but less satisfying than I expected.  Too tart. Too sweet. Not bitter enough. And oddly enough the bourbon was too subdued. I rated the cocktail between 2.5 and 3.0.

All of these shortcomings called for further changes: I stayed with the bourbon (86.6%); but I cut the amount of simple syrup in half; I used ¼ oz Meyer lemon juice and ¼ oz regular lemon juice; and I used a "fat" 1½ oz of bourbon and Campari. For me, these changes made for a better drink. It was less sweet, the tartness from the blend of lemon juices was in balance with the Campari's bitterness. With these changes, I rated the drink between 3.0 and 3.5. A side note: I used Angostura Orange bitters in both recipes.

I am going to try yet another change to the "Italian Gentleman." This time I'm going to try 1½ oz of Wild Turkey 101, ​a "fat" 1½ oz of Campari, keep the blend of lemon juice, and omit the simple syrup, and keep the orange bitters. If the resulting drink needs to be sweetened, I can add some simple syrup. I'll also be thinking about adding another bitter, but only afterwards and if I believe something is still amiss that would be improved by a particular bitter.

In the meantime, if anyone tries the original recipe for the Italian Gentleman," give your comment about the drink, and make any suggestions about the recipe. My goal is to get this cocktail so that it is rated by most people between 3.5–4.0. Maybe I'm being too unrealistic, in that the drink is simply no better than a 2.5–3.0 drink. And thanks for reading a long "it's an OK drink but it needs to be improved by your suggestion" critique.

Made this with 1oz bourbon and 0.5oz rye--a little heat helped keep it interesting.