In a brandy snifter, stir all ingredients without ice. As garnish, mist more Angostura over the top of the snifter and flame an orange peel. 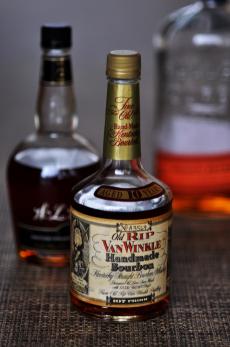 This is the third in a series on Bourbon by Zach Pearson. Read them all: Bourbon, Bourbon After the Act, Bourbon: What it is ... and isn't, Making Bourbon, Who Makes My Bourbon, Producer Capsules., Finding the Good Stuff, Tasting the Good Stuff, Neat, Mashbills, Geeky Information and Resources.

Defining bourbon is complicated. It’s easiest to quote the relevant laws then talk about them, so let’s go to the official record, the Federal Standards of Identity for Whiskey, CFR 27 5.22 (b). Skip down if you don't care to wade through the laws.

(b) Class 2; whiskey. “Whiskey” is an alcoholic distillate from a fermented mash of grain produced at less than 190° proof in such manner that the distillate possesses the taste, aroma, and characteristics generally attributed to whiskey, stored in oak containers (except that corn whiskey need not be so stored), and bottled at not less than 80° proof, and also includes mixtures of such distillates for which no specific standards of identity are prescribed.