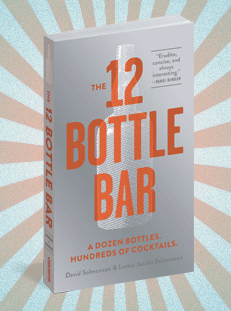 I received an advance copy from the publisher of The Twelve Bottle Bar, a new book by the David Solmonson and Leslie Jacobs Solmonson, authors of the Twelve Bottle Bar blog. Let me first be up front about a few things. I had heard of the blog before the review copy of the book came my way, but I hadn’t looked at it in depth. Furthermore, this book is firmly geared toward the novice cocktail enthusiast, which I am definitely not.

One of the high points of this book is that is covers the bases of modern cocktail making thoroughly. Amidst sidebars about classic bar cons, witty apocrypha on the origins of Cognac, and classic mid-century vodka advertising slogans, there is a lot of high quality, reasonably well researched information about ice, barware and specific brands to buy in any given price range.

New cocktail enthusiasts are told in no uncertain terms what spirits they should buy, why they should buy the specific recommended brands, and roughly how much they’ll pay for them. This is incredibly useful information when starting out. It will help readers avoid spending money on spirits and mixers with few uses until they feel confident enough to explore the world of spirits more in depth.

I also admire the sections on non-alcoholic drinks, cider and beer cocktails, and etiquette for hosting parties and being a guest at one. I would have been thrilled with a more in depth treatment of the logistics and attitudes toward hosting a cocktail party, and it would give the novice more confidence to have friends over and put The Twelve Bottle Bar to good use.

Shake, strain, straight up, cocktail glass. Garnish (or not, as desired).

Intermixed with this information are recipes that highlight each bottle’s useful traits, with some basic templates to clarify what differences a Sour has from a Buck or a Rickey. Alas, the book doesn’t segregate classic cocktails from modern ones. Walking into a bar armed with some new cocktail knowledge might mean you get a beautiful Ward Eight ... or a blank stare when you order a Laughing Zombie or a Dutch Cosmo.

The premise of The Twelve Bottle Bar is to limit the number of bottles purchased (and their price) while maximizing the number of different cocktails. While the official list of twelve bottles changes from time to time, the book has as a canon list the following types of alcohol:

It is a concession to writing a novice cocktail book that they include vodka in their twelve bottles, though finding cocktails that used vodka must have been difficult if the Solmonsons felt the need to have the Chi-Chi, Caprese-tini and a modified Lemon Drop as the drinks in the vodka chapter.

From a utility perspective, I was surprised by the lack of Bourbon and the addition of Genever. This certainly can’t be for a lack of cocktails utilizing Bourbon, or its importance to American cocktail history. Yes, being limited to twelve bottles does mean some things are left out (Chief Swizzlestick: Tequila?!). Unfortunately, many of the cocktails in the Genever section are a bit of a stretch: the Kopstootje (a beer and a shot), and genever substitutions for the Mai Tai, the Cosmo, the Turf Cocktail (an odd variant of which they picked up from the Waldorf-Astoria Bar Book) and an egg cream.

The cynic in me might think that the authors haven’t left their blog roots far behind. It is a common weakness of blogs to make simple declarative statements that shut down rational thinking and provoke page visits and angry missives between warring camps. It’s easy to say things like “Drink what you like means pair Chardonnay with steak!”. It’s much harder to provide thoughtful analysis of why and under what circumstances Chardonnay can pair well with steak and the best way to make it happen. Adding the rather obscure Genever to a small list of essential bottles doesn’t make a lot of sense, but it certainly will spark debate.

Finally, let’s focus on what I feel to be an annoying flaw in this book – the layout and editing. This book is (like the blog) blue and orange, and a lot of it. The layout is maddening – if I wanted to feel claustrophobic, uncomfortable and lost while reading a book, I’d go pick up Danielewski’s House of Leaves. Each of the small pages is packed full of information, mostly broken up into sidebars and lists so that, for example, page 222 starts in mid-paragraph about the Mojito, then gives a paragraph about the Raleigh (a Daiquiri variant with an ounce of orange juice), a quote from Lord Byron, then the recipe and instructions for the Raleigh on the next page followed by a few paragraphs about the Rum Rickey and the ingredients, the instructions to which are lost on the top of page 224. Pictures of drinks are small and in black-and-white and generally inline with the text, so it’s impossible to tell by the color of a drink if it’s properly made.

Twelve Bottle Bar the book is a lot like Twelve Bottle Bar the blog, but what is successful and uncluttered on a webpage is unwieldly and painful as a book. That said, I would recommend this book to someone who was just starting out in the world of cocktails, provided they take the book with a grain of salt, preferably on the rim of a great Margarita.

I applaud the twelve-bottle goal. Restricting the number of bottles will free many people to venture fearlessly into the world of craft cocktails. Certainly compromises are inevitable and attempting to cover a broad range of spirits implies a lack of depth. I think that little wrong would come from starting with the prescribed twelve bottles and adding others to suit. Or even better, start with fewer than twelve and skip spirits that are personally less interesting.

An alternative approach is to find a cocktail that you enjoy, buy the ingredients for it, and repeat, branching out as desire and budget allow. Both approaches work well.