Chill a cocktail glass. Stir over ice and strain into chilled glass. Garnish with an olive or cherry and a lemon twist.

Robert Vermeire's "Cocktails, How to Mix Them" (1922) has this as 1/2 gill = 2 oz Cognac, 2 dashes Angostura, 2 dashes Maraschino or pineapple syrup, 2 dashes Curacao. 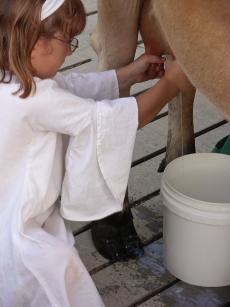 A few weeks ago, a friend mailed a box of old recipes to me because he knows I’m interested in such things. In amongst the mid 1980’s newspaper sections of Christmas cookies and odd advertisements was a column from the Dallas Times Herald that collected famous people’s holiday recipes – things like Ed McMahon’s turkey and brandied stuffing (the less said about that the better), but the jewel of the collection was a recipe from Charles Dickens’ great granddaughter for “Lemon Milk Punch”. This must have greatly confused 1980’s Dallasites. The recipe is in the Kindred Cocktails database now, but it was also a starting place for some interesting thoughts about milk clarification.

Originally, the addition of milk to a punch base was a way to “soften” the drink for the stomachs of delicate drinkers. Though this technique started in the mid 18th century, the process of fining wine is about as old as winemaking itself. Winemakers knew that if a substance like milk or blood was added to a barrel of wine, changes to the clarity of the wine would occur and with them, rough edges would be smoothed away and the stability of the finished product would be enhanced.

This smoothing and preservation was important before the 20th century. After Dickens died in 1870, bottled milk punch was found in his cellar still pleasant to drink. But in the hundred years or so between his death and the publication of his punch recipe, milk clarification fell out of favor. Modern food purity laws in the United States (among them the Bottled in Bond Act of 1897) and a better understanding of distilling and aging of spirits mean that there aren’t a lot of rough edges to be smoothed away. Modern refrigeration means that the fight against spoilage isn’t a matter of guesswork anymore.