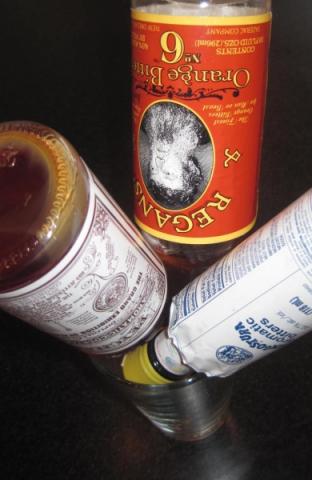 Cocktails with Lots of Non-potable Bitters

Many of the definitive cocktails from both vintage and modern times are held together by non-potable bitters - infusions of various barks, roots, spices, and other flavoring agents that were traditionally developed as medicine. Before Prohibition (but after the cocktail had been well-established), this usually meant Angostura, Peychaud's, Boker's, or orange bitters, which were key ingredients in drinks like the Manhattan, the Sazerac, and - despite what Winston Churchill said - the Martini.

Today, bitters have expanded to include any number of artisanal products or housemade concoctions with flavors ranging from rhubarb and celery to chocolate mole and Jamaican jerk. Still, the cocktail-making procedure remains the same: mix together a base spirit, sugar or perhaps some liqueur and/or fortified wine, and a dash or two—at most—of bitters. After all, these are non-potable, the legal status which allows them to be sold places where other alcohol is prohibited, which is why you can get Angostura at your local grocery store even if you have to go somewhere else for the rye and sweet vermouth with which it belongs.

Shake with ice and double strain into a coupe glass.

This non-potable, dash-or-two status was generally upheld throughout cocktail history, with only a handful of standards calling for more (the most notable being the Seelbach, which has a full 7 dashes each of Angostura and Peychaud's). But there is a hidden history of non-potable bitters, filled with very potable concoctions which use bitters as a base spirit. The most iconic of these drinks is probably the simple Angostura Sour, featured in Charles H. Baker's classic The Gentleman's Companion—the only liquor in the drink is a full ounce and a half of Angostura. But like so many other things vintage, modern bartenders have revived and updated the concept. Valentino Bolognese won an Angostura cocktail competition in 2008 with the Trinidad Especial, a non-intuitive mix of equal parts Angostura and Orgeat balanced with lime juice and aged pisco. Since aged pisco is difficult to find in the US, this drink was tweaked by New York bartender Guiseppe Gonzalez to create a modern classic: the Trinidad Sour, which subs out the lime juice and pisco for lemon and rye, creating a delicious frothy cocktail that brings out the cherry wood in the Angostura.

The flood gates have since been opened on bitters-based cocktails (as well as drinks that provide more than a healthy dash of the stuff), which has revealed huge new avenues for mixologists to consider. Below are a few of the best—but don't stop here, keep on the lookout for more bitters-heavy drinks around Kindred Cocktails, and take your own swing at a new concoction as well. Who knows, it might get so popular you'll have the FDA knocking on your door.

I am interested in bitters for their health benefits in cocktails.
Things like Cynar for liver detox
Not a fan of artificial colors