1) Shake well with ice and strain into a frozen coupe glass.
2) Garnish with chia seeds.

A riff on "Valley Of The Dark Lords" cocktail created by Sol Trece at La Cuevita Bar in Highland Park, CA. 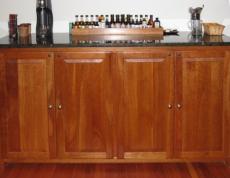 In many ways, my home bar is an extension of my passion for cooking. Years ago, when vanilla beans were on sale, I’d make vanilla extract for friends or flavored vodkas with weird ingredients that I’d invariably take a sip of and shove into the back of the pantry. Over time, the bottom shelf of the pantry became an exercise in forensics – I never really labelled anything, so color and smell became a clue as to just what I’d done.

Intermixed with all of those science experiments was my collection of spirits. Back then, I was lucky enough to work in a large liquor store, and part of my training was to be able to speak fairly authoritatively about most things we sold. Talking to my coworkers led me to amass about a dozen bottles – things like Cruzan Blackstrap, Maker’s Mark and Monopolowa vodka.

The power of the Anvil

The trouble really began when I met Bobby Heugel. I wandered into Anvil on a tip from a friend in my CSW* study group, and was dutifully impressed. A few weeks later, I popped in after work (still in my work shirt), and the friendly conversation quickly became much more professional. Bobby ran to the back and came out with a three page annotated list of liquor that he wanted to sell, but no one in Texas could find for him. I took the list in to our liquor buyer and after some initial hesitance, he agreed to pretty much bring in whatever Bobby wanted.

So now I had to learn how to talk to liquor reps. Between having Bobby in one ear and liquor reps giving me puzzled looks until I figured out how to get what I wanted from them, I learned a lot about liquor in a fairly short period of time. Sitting at Anvil, I got a crash course in period cocktails and how to think about liquor in the same way I thought about wine. And because I could see physical inventory throughout a large chain of retail liquor stores, I got to buy a few special bottles of things that are now hard to come by.